BBC Breakfast’s Jon Kay and Sally Nugent paid a poignant tribute to a sporting legend after his death aged 52.

Scottish international rugby hero Doddie Weir passed away over the weekend, six years after being diagnosed with Motor Neurone Disease.

Before his death, Doddie raised millions through his My Name’5 Doddie Foundation, earning him an OBE.

On today’s show, Jon and Sally paid a touching tribute to him, with Jon saying to his co-host: “What a legacy. You were only with him at that foundation fundraising dinner a couple of weeks ago.”

Sally replied: “We seen him about two weeks ago when he was clearly very, very frail.

“He’d been ill for a week or so but he was determined to be there. 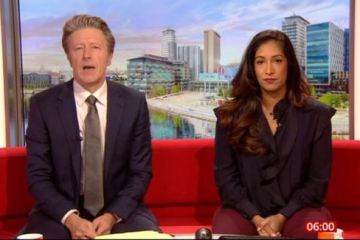 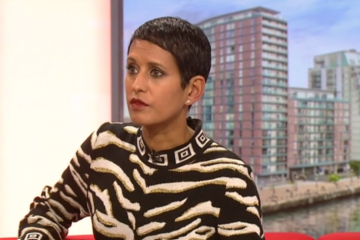 “It was a fundraising dinner for his foundation which has raised millions of pounds for research into motor neurone disease and even though he was poorly, there was a twinkle in his eye and he was still making people laugh, he was still taking the Mickey out of me and teasing me and everyone else.

Sally added that “we’ll miss him”, and the show shared a video montage of Doddie’s achievements on and off the rugby pitch.

The tributes left some BBC Breakfast viewers in tears, with one writing on Twitter: “Well that beautiful tribute to Doddie Weir on BBC Breakfast has got me crying in my porridge. Bless.”

Most read in News TV

Another added: “It was such sad news to hear the passing of the great Doddie Weir at just 52. A legend in life & forever more. Thoughts & love go to his children, family & friends.”

A third tweeted: “Wonderful tribute to Doddie on #BBCBreakfast this morning.”

Meanwhile a fourth agreed, writing: “What a brilliant tribute to
@DoddieWeir5 from @BBCBreakfast could genuinely see what he meant to @sallynugent and @jonkay01 that was emotional to watch.

“Keep the fight going and keep spreading the word to find a cure for #MND #BBCBreakfast #DoddieWeir.”

BBC Breakfast airs daily from 6am on BBC One.