WWE legend Dwayne ‘The Rock’ Johnson has been offered a dream match against his cousin and Undisputed Champion Roman Reigns. Reigns&


WWE legend Dwayne ‘The Rock’ Johnson has been offered a dream match against his cousin and Undisputed Champion Roman Reigns.

Reigns’ special counsel Paul Heyman insists that a bout between the two wrestling stars, which has been touted for WrestleMania 39, is solely up to The Rock.

Johnson and The Tribal Chief have been linked with a dream match for many years now and Heyman hinted that WWE are all in.

But until the Hollywood star shows interest this will be nothing but a “fantasy”.

“If Dwayne Johnson wants to be embarrassed, and humiliated, and smashed in front of the entire world against Roman Reigns, he’s welcome to step in against The Tribal Chief. 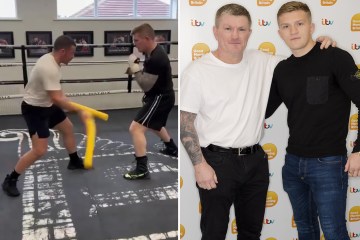 Hatton mistaken for son after body transformation with fans stunned

“Imagine the box office that could be driven by Roman Reigns vs Dwayne ‘The Rock’ Johnson in which you get to see The Tribal Chief smash The Rock.”

Heyman added: “We can speculate all we want about Dwayne ‘The Rock’ Johnson stepping into the ring with Roman Reigns.

“It’s masturbatory fantasies until there’s a piece of paper in front of us with Dwayne Johnson’s signature on it. Then I know it’s real.

“And until then, it’s just fantasy. It’s a fantasy of Dwayne Johnson’s to come to get the rub from The Tribal Chief Roman Reigns.

Most read in WWE

ROCK AND A HARD PLACE

“It’s a fantasy of Dwayne Johnson to feel the energy of…a hundred thousand people live cheering on as the Tribal Chief smashes The Rock.

“It’s a fantasy of Dwayne Johnson to step into the ring with the greatest of all time Roman Reigns, then, now, and forever.

“And until he puts his name on a contract, it’s just his fantasy.”

This comes after Reigns signed a new WWE deal, similar to Brock Lesnar’s, which allows him to work less dates.

The Rock is currently working on his TV series Young Rock, which looks back into his upbringing and rise into wrestling superstardom, along with other projects.

The two men are not biological cousins but still share a special family bond through their Samoan heritage.

Their relation occurred as a result of Reverend Amituana’i Anoa’i, Reigns’ grandfather, declaring Peter Maivia, The Rock’s grandfather, as his blood brother – something that holds deep meaning within Samoan culture.