AMY Wyatt and Moira Dingle ran from the Dales in the aftermath of Al Chapman’s death.

This leaves Matty Barton alone in Emmerdale and he’s determined to get the answers he wants from Cain Dingle.

Matty Barton was left alone in Emmerdale with many questions[/caption]

Will he find out the truth?[/caption]

Both women left the eponymous village suddenly without giving any explanation to their nearest and dearest.

To top it all off, Amy even took her son Kyle Winchester with her and the pair vanished without looking back.

But while fellow residents seem to have accepted their exits, Matty Barton (played by Ash Palmisciano) is wondering why the two most important women in his life have left so suddenly.

Determined to find out the truth about his girlfriend and his mother, Matty is just as ready to get to the bottom of Cain Dingle’s reasoning for murdering Al Chapman. 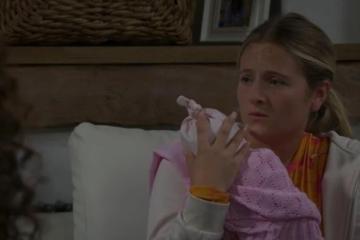 This is despite Chas’ attempts to divert his attention.

The Woolpack pub manager, who knows who really killed her illicit lover, freaks out when Matty reveals he has a visiting order to see Cain behind bars.

Matty meets up with the village tough man in the visitors room and lays out his case but he’s instantly shot down.

Cain leaves, relieved as he believes he has put Matty’s suspicions to rest.

Unbeknownst to him, Matty doesn’t believe a single word he has said.


Emmerdale fans all have the same complaint about David Metcalfe

As viewers know, Cain (played by Jeff Hordley) was thrown in prison after pleading guilty to the murder of Al Chapman.

But he soon revealed to his wife Moira (Natalie J. Robb) that he was actually innocent.

To make matters more conflicting, he admitted his young son Kyle (Huey Quinn) had shot Al in an attempt to protect him.

Cain decided to take the blame to spare his son from a bleak future, which convinced everyone around him due to his long-running feud with the late businessman.

Everything you need to know about Emmerdale

But while Cain was telling his other half the truth, Kyle was coming clean to his mother Amy (Natalie Ann Jamieson) and she came up with a plan to keep the authorities at bay.

When she realised Amy and Kyle had left the village, Moira panicked and was questioned by her brother Mackenzie.

This led to her telling him the truth about Al’s death and swearing him to secrecy.

She then also made the decision to leave the Dales for Belfast, taking her own son Isaac with her.

Will Matty learn the truth?

The young boy shot the businessman[/caption]