HELEN Flanagan had an emotional rant on Instagram after ‘feeling judged’ following on from her split with fiance Scott Sinclair.

The former Coronation Street star, 32, opened up about her experience as a mum on social media.

The soap star, who had popular BBC show Motherland on in the background, explained that a certain encounter that happened last week left her feeling “annoyed”.

Helen told her 1m followers: “I’m quite good I think at controlling my emotions, I’m quite busy, but I always have emotional outbursts when I’m due on…”

“This is like a long story short, but I get, I was really annoyed last week because I won’t go into too much detail but basically I hate it when mums are made to feel uncomfortable in kind of like I don’t know..

“I didn’t have Matilda young but youngish and I’ve always gone everywhere with my kids, like flown with them, trains, hotels and I’ve just literally always gone where I want to go. 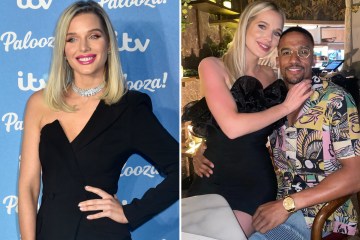 “I just don’t like it when you get people who basically are being rubbish towards you because you’ve got kids and you’re a mum, basically giving you the evils.”

The star continued: “I’m probably babbling but yeah that really irritates me, when people are just mean to mums.

“I won’t go into the conversation too much because it’s just too long, I just get really really annoyed when people aren’t nice to mums.”

Helen and Scott, 33, who started dating in 2009, are parents to Matilda, seven, and Delilah, four, and one-year-old son Charlie.

Last month they shocked fans when The Sun revealed that they had split after 13 years together.

A source told us at the time: “Helen has removed her engagement ring and told those close to her that she is no longer with Scott.

“They hit a rough patch in the summer and after she came back from South Africa their relationship ended.

“Helen and Scott are committed to co-parenting their kids, even if they are no longer a couple.”

When quizzed on how she had been feeling in the wake of her split she said: “Good! Life is good!”

Speaking of her life plans in the run-up to Christmas, Helen said: “I’m the only one around my house who has got their Christmas lights up .

“We’re probably [going to be] at home, I’m having a new dining room which I’m very excited about, so yes, Christmas at my house.”

Helen with her three kids Charlie, Delilah and Matilda[/caption]