‘He’s never fought a Joe Calzaghe’ – Canelo Alvarez could be all-time ring legend but I’d have beaten him, says Calzaghe

CANELO ALVAREZ is on course to become an all-time boxing legend – but the Welsh dragon still reckons he would have slayed him. Joe Calzagh

Harry Kane must become England’s all-time leading scorer BEFORE World Cup or risk it being a ‘distraction’, says Rooney
See if you live in one of the most STD-riddled US states as chlamydia, gonorrhea, & syphilis cases reach all-time high
Putin the pariah turns to Africa as relations with West at all-time low over Ukraine war


CANELO ALVAREZ is on course to become an all-time boxing legend – but the Welsh dragon still reckons he would have slayed him.

Joe Calzaghe ended his career undefeated after 46 brilliant wins and would have been the undisputed super-middleweight champion if it were not for grubby boxing politics.

That is the iconic four-belt status the 31-year-old is going for on Saturday, as he aims to add Caleb Plant’s IBF 12st title to his WBC, WBA and WBO belts.

The magnificent Mexican now boasts a record of 56-1-2 and has also collected world titles at super-welter, middle and light-heavyweight – where Calzaghe ended his legendary reign with wins over Bernard Hopkins and Roy Jones Jr.

Another Las Vegas win this weekend will put Canelo in 49-year-old Calzaghe’s pound-for-pound top-10 of all time – but the brilliant Brit still backs himself to have trumped the ace.

He said: “if he continues the way he’s going and winning titles, he has to be in the top 10 of all-time probably, based on what he’s achieved.

“And his longevity, longevity is important as well. Winning the title is one thing, we’ve seen fighters win a title and then lose it, so for him to still be the champion is impressive.

“He’s still only 31, he’s just a true, true champion and I have a lot of respect for him.

LATEST IN SUN BINGO AND VEGAS


Make it epic with our competition with PokerStars Casino to win £5,000

“But of course I’d win against him in my prime! He’s never fought a Joe Calzaghe and I never fought Canelo, but it’s a fight when I look at it that I would love to have had.

“Of course, I wish I was around now when Canelo is around. Of course it would be a tough fight, but I think I would have won.

Southpaw Calzaghe believes his unorthodox stance – that helped fellow lefties Erisland Lara and Austin Trout give Canelo problems in their distance losses – would have helped him secure a fantasy-fight victory.

But Plant, 29, will have a stance and style all too familiar for the Guadalajara gunslinger, leaving Calzaghe unsure how the underdog can stun the world.

“I was a southpaw who threw punches in bunches, combinations and had speed but I could also adapt,” the happily retired hero said.

“When you are fighting a guy like Canelo who you have to have a plan B, if you don’t then you will never be competitive.

“You need to be able to switch from the front to backfoot, from aggressive or defensive, to try to confuse him and put him off of his gameplan.

“Plant has good skills, he is slick and can move, he has fast hands but you’re in a completely different league when you fight Canelo.

“Plant needs to land combinations and have the better jab but Canelo is a master of closing down the range and cutting off the ring so Plant needs a plan B.

“I don’t know how hard Plant hits, I know he only has 12 KOs (from 21 wins) so this fight will answer a lot of questions because Canelo is red hot.”

Canelo is as hot in the box office and pay-per-view stakes as he is in the rankings, meaning anyone who signs up to face him earns life-changing money – win or lose. 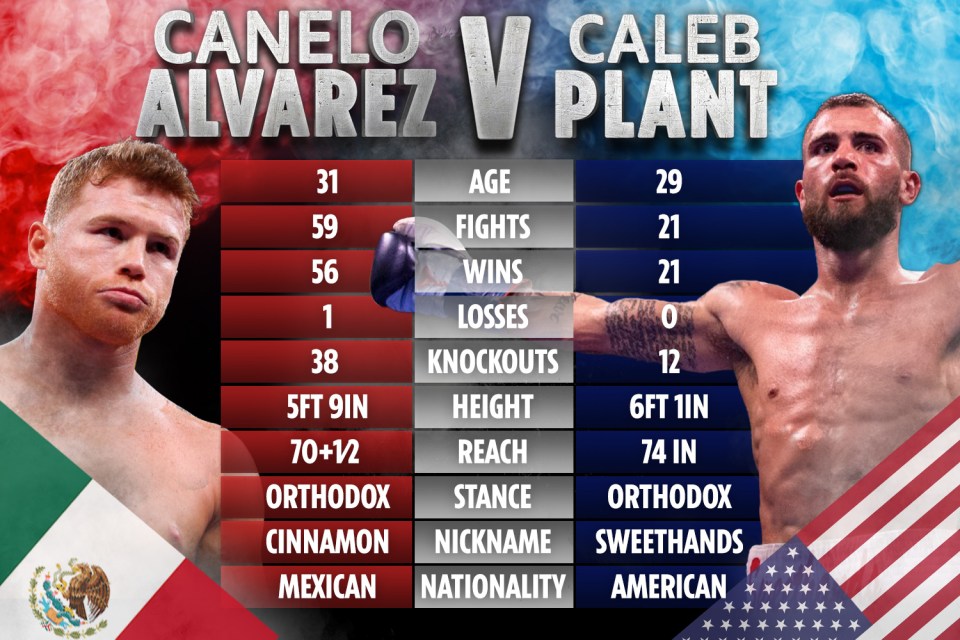 And Calzaghe reckons that extra power could hand the flame-haired fighter a psychological boost before the bell even rings.

He laughed: “I think having that hold over an opponent could have an effect but I wouldn’t know as I never had that luxury, I had to really earn my big paydays!

“But going from earning hundreds of thousands of pounds to multi-millions in one hit is bound to affect you because it is life changing.

“You could instantly feel you are set for life and your hunger could suffer.

“It must be like winning the lottery – but instead of having to pay for a ticket you have to get your a*** kicked.”