HomeTv & ShowI didn’t have a bump the whole way through my pregnancy –...
Tv & Show

SHE expected to be showing off a growing bump throughout her pregnancy.

But Nikki Salazar’s journey to motherhood was barely visible to the naked eye, as she explained in a video on her TikTok page.

“My pregnancy journey except I didn’t show until two weeks before giving birth,” Nikki wrote over the clip.

She began by showing herself at one month pregnant, wearing a blue crop top and black skirt, with no sign of a bump at all.

At two months she was still wearing crop tops, pairing her T-shirt with some low-slung leggings.

Three months into her pregnancy, Nikki started to struggle with her sickness, writing: “I started to lose a lot of weight because I was throwing up 24/7.” 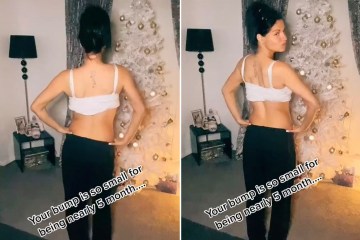 I’m 5 months pregnant & no-one can believe it, they say my baby bump is ‘so small’ 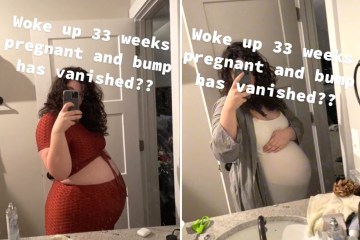 At four and five months’ pregnant, she had no bump, writing over a snap of herself at five months: “Still nothing”.

Even at six months, when she could see her baby “moving a lot” inside her stomach, there was no sign of a bump.

But it was at eight months that she “finally saw the actual bump”.


Find the error in this number puzzle – how long did it take you to spot it?


I have UPVC door, there’s a switch to make it less draughty this winter

BILL YOU BELIEVE IT

It was still tiny though, as Nikki share a snap of herself five days before giving birth, with barely anything visible.

People were quick to comment on the video, with one writing: “I know you say it didn’t show. but at least you knew.

“Because if I see my tummy moving like that I would freak out.”

“Hahah this happened to me too no one could tell I was pregnant,” another added.

While a third commented: “I looked 6 months gone as soon as that 2nd line appeared.

“Congrats on the little one and being gods favourite.”

She was still wearing skimpy ensembles at eight months pregnant[/caption]