MAKEUP is capable of producing quite the transformation.

A woman who feels she’s more attractive when she’s all dolled up has decided to show social media users how she looks when she’s made up.

In a TikTok video, the woman, Alisha Secic, stood completely bare-faced on camera.

She then transitioned through a series of clips in which she showed viewers her made-up face.

She sported a fun eyeshadow look that featured yellow, orange, and pink hues. 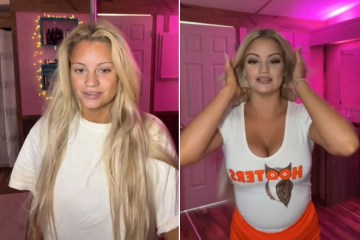 Her flawless foundation and glossy nude lips finished things off.

One person in the comments section of her video was blown away by her artistry.

Previously, a proud catfish shared that she’s told she’s pretty either way, but jaws drop when she does her makeup.

In a TikTok video, the woman, Brei, showed how she looks all glammed up.

She had platinum blonde wavy hair, and her makeup was flawlessly done.

She sported a dramatic eye look with white eye shadow, and white dots adorning the eyes.

There was highlighter in the inner corners of her eyes and the bridge of her nose as well.

Her dramatic eyelashes and defined brows tied the look together.

Brei then cut to a clip of her bare-faced, mouthing along to the words “girl that’s not me” that played in the background of the video, insinuating that she felt she looked different with no makeup.

“I know I’m a catfish, a proud one boo,” she wrote in her video’s caption.