A WOMAN who has lost an incredible six stone in weight by calorie counting has revealed exactly what she eats in a day – with nothing off limits.

“This is what I eat in a day that led me to lose six stone,” she began. “I always start my day with a big bottle of water and green tea.”

For breakfast, she had two poached eggs on one slice of white toast, alongside some bacon and tender stem broccoli – for 352 calories.

Lunch was a burrito, consisting of nachos, lettuce and onion and some kind of meat in a tortilla wrap, totalling 347 calories.

“I make sure to stay in my calorie deficit which means I weigh all my food out and I calorie count” Bethany explained.

“I drink lots and lots of water, it really really helps.”

As a snack, she had a small bunch of red grapes for 66 calories, before having a homemade kebab served with salad and chips for dinner for 378 calories.

She followed her dinner with a crumpet spread with Nutella and served with strawberries and blueberries, for 259 calories.

“I don’t cut anything out, if I really want something I’ll have it and this prevents me from bingeing out,” Bethany added.

As a late night snack, she had a Maryland cookie bar for 96 calories, alongside another cup of green tea and a large bottle of water. 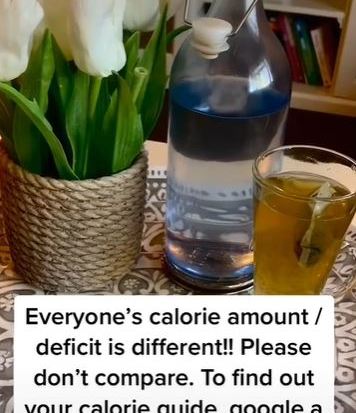 The total for Bethany’s day was 1,500 calories, but she urged people to work out their own calorie deficits, as it’s different for each person.

In the caption for the video, Bethany added that she’s gained 10lbs since she filmed the video in the summer, but is “completely at peace” with where she currently is.

The comments section of the video was quickly flooded with messages from others praising Bethany for sharing her daily menu example.

For breakfast she enjoys poached eggs with toast, bacon and broccoli[/caption]

Lunch is a homemade burrito[/caption]

And she has a homemade kebab, chips and salad for dinner[/caption]

“I started off at 17.11 stone and weighed in yesterday at 12.11 – still a bit to go but this account has motivated me massively,” one person wrote.

“This is so inspirational,” another person commented.

“Fantastic, be really proud – a fantastic inspiration,” someone else added.

Bethany also replied to another comment from a viewer asking her how long it had taken to shed the weight, admitting it had taken one year to get where she is now.

A Nutella crumpet with berries is for dessert[/caption]

Before she started calorie counting, Bethany was 16 stone[/caption]

In other food news, cook your poached eggs using a cake tray to get them perfect.

This woman ended up in hospital after going to an all you can eat buffet.

And this TikTok chef has perfect a Nando’s knockoff burger for £1 per serving.