I’M A Celebrity viewers broke down in tears after Owen Warner reunited with his mum tonight on the ITV show.

The Hollyoaks star, who plays Romeo Nightingale in the Channel 4 soap, placed second behind new queen of the jungle Jill Scott.

Before hosts Ant and Dec chatted to winner Jill, they had a few words with Owen.

The soap star was over the moon when the Geordie duo said that his mum Polly was across the studio from him.

Owen ran over to him mum and gave her the biggest hug.

Viewers watching at home teared up at the reunion.

Read more on I'm A Celeb 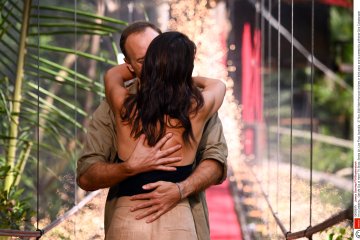 One tweeted: “owen and his mum im crying #ImACeleb.”

Another said: “Owen making me cry, what a lovely sweet guy and sprinting straight off to his mum #ImACeleb.”

It comes after viewers all said the same thing about Owen’s ‘disgusting’ final trial.

The actor, who has made it clear over the past few weeks that he is VERY hungry, took part in the Bushtucker Bonanza tonight to win his final meal.

He was given the dreaded eating trial and had to eat five dishes.

One was a fermented duck egg and fans were left scratching their heads when he confessed that he liked it.

He managed to win all five stars and indulged in the biggest meal ever.

Jill was crowned the winner of I’m A Celebrity 2022 this evening – after an incredible 12 million votes.

The Lioness, 35, beat off competition from Matt Hancock and Owen to take home the prestigious title – just months after helping England win the Euros.