MARK Wright and Michelle Keegan have shown fans the “nerve wracking” moment they had their luxury bathroom put in.

The couple have given fans a sneak peek at their luxurious bathroom space in their new mega mansion, which they moved into this year.

Mark, 35, and wife Michelle, 35, made sure no expense was spared in completing their Essex dream home, installing their own spa.

The former The Only Way Is Essex star has revealed the incredible spa space in a video, showing the final touches being installed.

The reality TV favourite filmed for his social media as glass specialists brought in huge panes to fit in the “sauna, shower and steam room”.

Taking to the Wrighty Home Instagram account, Mark showed men carrying the huge panes up the stairs and into their en-suite.

From Mark Wright to Cara Delevingne, celebs raking it in from property portfolios 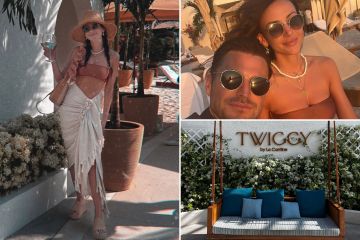 “Back when they turned up with glass for the sauna, shower and steam room. One of the most nerve racking jobs to date,” he wrote.

“We’ve worked out every which way and what to get these up the stairs safely,” Mark could be heard saying in the clip.

“Now, we’ve got the scaffolding in here, it’s the mission of the job – an dthe first is just getting it through the door.”

Mark showed off the finished product as he snapped a photo of the glass placed in the walk-in shower and across the door of the sauna.


Gemma Collins shows off 'real' hair beneath extensions amid transformation

“Steam room, and we did it! Shower screen, sauna and steam, all glass and fitted perfectly,” he wrote under the snap.

It comes after Mark and Michelle moved into their new home in October, as they posted ordering their first take out to the house.

The jaw-dropping pad has been months in the making and designed to the couple’s exact requirements.

It contains a bar, mini nightclub with DJ booth and a spa – and is surrounded by Wimbledon tennis-style lawns.

There’s also an epic driveway and a home gym for the fitness-obsessed couple to work out in, as well as a swimming pool.

Each of the property’s five bedrooms has its own en-suite bathroom, while three of them even have dressing rooms.

The couple bought their home for £1.3million in 2020 but have been working on building it from the ground up ever since.

The original property has been transformed into a high-tech mansion bristling with security features.

The bathroom was completed with large pieces of glass[/caption]