JOSHUA BUATSI stepped over Spider Richards to become light-heavy king of South London and move closer to a world title.

The neighbourly respect went out the window before even the first bell as a ruck almost started as Richards, 32, entered the ring.

After losing a coin toss, Buatsi was already settled in his corner when his nightmare neighbour entered and bounced against the ropes to get comfortable.

Right before the bell devout Buatsi bowed for one final prayer then set about Richards with rasping double-jabs. 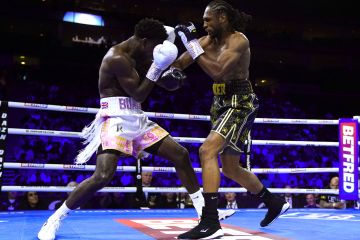 Battle of South London ends in thrilling win for Buatsi 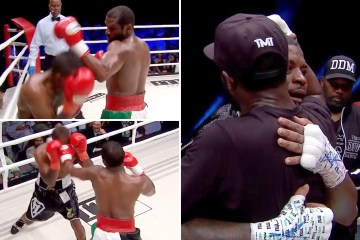 Richards enjoyed success with arrow-like one-twos but freshly-shaved Buatsi let the shots glide off his face.

Then right at the end of the round Buatsi snapped into his ‘Just Business’ manta and thumped bruising shots into Richards who was barrelled back into the ropes and struggling under fire until the bell saved him.

Richards’ reputation for slow starts was telling as he was whacked and wobbled as soon as the second commenced .

But Spider tangled his opponent up in his gangly arms and survived the punishing session and Buatsi chased him around the O2 ring trying to stamp him out.

'Has he been frozen?'

The exchanges in the third were brilliant, Buatsi slashed hooks into Richards’ body but then Spider landed a jab-right-left-hook combination.

Buatsi did a drunken dance, faking vulnerability and mocking his foe’s power at the same time.

Then right on the bell Richards looked genuinely hurt but another booming Buatsi blow.

A left hook to the temple seemed to buzz Richards at the start of round four but his willowy frame was still there gunslinging right on the bell when the thrilling pair went toe-to-toe and bobbed and weaved as they hurled heavy shots.

Richards had success in the fifth with a long right hand he was thumping into Buatsi’s left ear.

But then JB unleashed a dozen-punch combination that looked like getting the job done, only for Richards’ excellent defence to deflect the worst of them.

The pair were engaged in a thrilling war[/caption]

Both fighters put in excellent performances[/caption]

Richards enjoyed the sixth perhaps more than anything earlier but one crisp shot resulted in Buatsi throwing up his hands and ordering him to “come on!”

Buatsi’s cerebral US trainer Virgil Hunter was vocal in the seventh, telling his man that Richards’ eyes were swelling up and telling his student to show his learning.

Ghana-born Buatsi was fuming about a couple of accidental low-blows in round eight and Spider was warned.

Then Richards almost had it won, the same honeyshot right hand he kept cracking around Buatsi’s badly placed left glove robbed the favourite of his senses.

Dazed and confused Buatsi chose fight over flight and attacked on instinct and he showed true grit to survive the biggest scare of his career.

Both men needed time to recover in the ninth from the beating they were dishing out and having to absorb in cruel intervals.

Buatsi lost his gumshield in round 10 but Richards almost lost the fight as the teeth-baring ace went on a rampage.

Shots scythed in from all angles but Richards showed huge heart and balls of steel when his impressive defence let him down.

Buatsi took a moment to look toward Hunter in the eleventh and failed to regain his focus before Richards pinged him with another right hand.

The final round was magnificent and the partisan crowd jumped up to cheer and thank them for the blood, sweat and bruises they thumped out of each other.