KHLOE Kardashian has subtly clapped back at trolls by eating an ice cream cone after fans called her “too skinny.” She was seen hol


KHLOE Kardashian has subtly clapped back at trolls by eating an ice cream cone after fans called her “too skinny.”

She was seen holding the cone in Kylie’s Get Ready For The Met Gala With Me video.

Kylie shared a nearly 10-minute video of how she got ready got the gala.

During her Off-White fitting, Kylie’s sisters were present.

While her stylists helped her put her hat on, Khloe showed up.

She held a vanilla ice cream cone, covered in a chocolate dip. 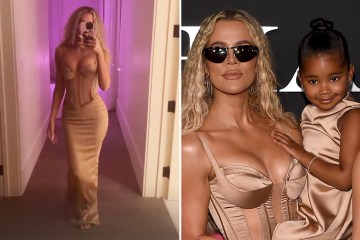 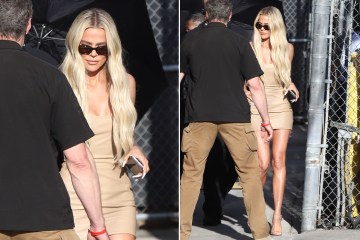 As Kylie complained about something with her outfit, Khloe stopped her.

She held the cone and wore a hoodie and sunglasses as she argued with her sister.

The 37-year-old finally took a lick from her cone as Kylie put on her jewelry.


I got gong from William wearing no knickers – and not for Spice Girls, says Mel B


I want four kids with Molly-Mae ASAP – she’s all I ever wanted, says Tommy Fury

Khloe continued to be her hype girl while taking photos of Kylie on her phone and holding the cone in her other hand.

This scene came after fans feared for Khloe for being “too skinny.”

The 37-year-old has been documenting her fitness transformation on social media.

In March,  Khloe took to her Instagram Story to share a video of herself posing in a full-length mirror.

Her tiny frame was on full display as she wore a light blue sports bra and high-waisted leggings.

Shortly after The Good American founder shared the video, Keeping Up With the Kardashians fans rushed to Reddit to express their concern over her thinner appearance.

The original poster said, “I know Khloe seems very happy with her body lately and I’m happy for her, but I can’t help but be concerned when she posts these stories because she’s SO skinny SO suddenly??”

“Wow, that barely looks like her face,” wrote another.

“Wow she’s lost so much weight,” wrote a fan.

“She is already this thin and still looks to be sucking in her stomach,” said a third.

Many fans have said that Khloe got thin to show revenge on her cheating ex, Tristan Thompson.

She stepped out in March in a skin-tight, leather outfit and showed off her slim figure.

“Her legs are so small. Should we be blaming Tristan? I just don’t understand. I’m concerned,” asked a Tiktok user who shared the photos to the platform.

Tristan – who shares daughter True, 3, with Khloe – fathered a child with Maralee Nichols back in December 2021.

In January, he admitted in a lengthy Instagram post that he is indeed the father of Maralee’s child.

After the NBA player revealed the paternity results, he also issued a public apology to Khloe.

SHE WON’T BE BACK

Khloe showed off her thin frame at the Met Gala this past Monday.

She wore a skin-tight, gold, fringey dress, along with black gloves and tan heels.

However, fans slammed her for her dress being “too boring.”

While fans praised her for her figure, they said she won’t be invited back because of her dress.

“Is that Khloe next to her??? that’s her met gala debut??? She ain’t never going to be invited again,” one fan asked on Twitter.

“Why is Khloe wearing a prom dress to the met gala?” another asked.

This was Khloe’s first Met Gala after she had been banned in the past.

Khloe Kardashian waved as she arrived at the grand opening of the Kardashian Khaos store at The Mirage Hotel & Casino on December 15, 2011[/caption]