MARTIN Lewis has issued urgent advice to workers who could be missing out on extra money by not making a simple tax check.

The consumer champion explained on the latest episode of his ITV Money Show how employees could be losing out on cash if they’re on the wrong tax code.

A tax code is used by your employer or pension provider to work out how much Income Tax to take from your pay or pension.

But Martin explained how millions are on the wrong one and could be either overpaying or underpaying.

So while this means you might get money back from the tax man if you’ve overpaid, you might also have to pay some back if you’ve underpaid.

Martin explained: “Millions of people are on the wrong tax code.

Martin Lewis says 7m Brits may be owed more in benefits, are you on the list? 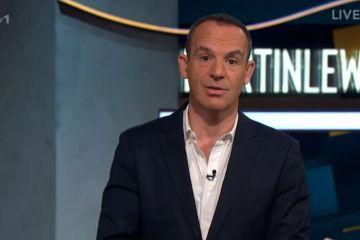 “Some are overpaying and are therefore due thousands of pounds back.

“Some are underpaying and are therefore going to get a shock because they’re asked for more money.

“It’s really important, because it’s your legal responsibility, not HMRC, not your employer, to check your tax code.

“And there are tools online which will give you a rough idea of whether you’re on the right tax code in your circumstances.”

Most read in Money

What is a tax code?

Simply put, your tax code is the code used to figure out how much of your pay packet should be deducted and given to HMRC.

It’s made up of several numbers and a letter.

1257L is the code currently used for most people who have one job or pension.

But there are lots of different codes you can be given which all reflect your work or pension situation and how much money will taken from you.

The numbers tell your employer or pension provider how much tax-free income you get in that tax year.

That’s because those earning up to £12,570 a year are not taxed at all. This is called your Personal Allowance.

How do I find my tax code and how can I change it?

You can find your tax code a number of different ways, including:

HMRC should, normally, update your tax code when your income changes. They should receive this information from your employer.

But sometimes HMRC might not have the correct information and you may be given the wrong tax code.

Of course, HMRC won’t know if you have the wrong tax code so will continue deducting what it thinks is the correct amount from your pay.

So it’s up to you to be pro-active and get in touch with them if you think it’s wrong.

As Martin said, you can use tools to check whether yours is incorrect, such as this one on the government’s website.

You can the tool to update your employment details and tell HMRC about any change in income that might have affected your tax code.

If you have paid too much or too little tax, HMRC will send you either a tax calculation letter, also known as a P800, or a Simple Assessment letter.

If your P800 letter says you’re due a refund, it will tell you how to claim it.

You might be able to request the refund online, but you’ll need your Government Gateway user ID and password.

You can create one if you don’t have one, but you’ll need your National Insurance (NI) number and two of the following to hand:

You’ll receive a Simple Assessment letter if you owe Income Tax that can’t be automatically taken out of your income, owe HMRC £3,000 or more or you have to pay tax on the state pension.

If you think the calculation on the letter is wrong, you should call or write to HMRC within 60 days.

If HMRC agrees your Simple Assessment was wrong you’ll be sent a correct version.

If they disagree you’ll get a letter explaining why, how to pay and how to appeal if you still think it’s wrong.

You can appeal, but you have to do it within 30 days of receiving your initial decision letter.

You’ll need to specify which amounts you think are incorrect and what they should be.

In other news, we explain how much National Insurance you pay.

Plus, we explain what Income Tax actually is.

And, four reasons the second instalment of the £650 cost of living payment could be delayed.