National rail strike: Union boss admits longs to be a modern-day Arthur Scargill — dragging UK back to strife of 1970s

Victims of 1970s and 1980s contaminated blood scandal should get £100,000 payout, judge declares
Labour to drag Britain back to 1970s with Reeves' plotting union takeover of economy
Emmerdale’s Charley Webb almost unrecognisable as a 1970s cop as she films gruesome new crime drama

RAIL strike leader Mick Lynch has admitted he longs to be a modern-day Arthur Scargill — and drag Britain back to the industrial strife of the 1970s.

The firebrand RMT boss wants unions to regain the power and control which brought the country to its knees during the infamous Winter of Discontent.

He revealed he has modelled himself on militant miners’ leader Scargill to whip up support for his battle with the Government — and confessed: “I’ve got an ego.”

In a frank interview, he gave a chilling threat of union barons dominating the political landscape again for the first time in decades.

“People talk about the Winter of Discontent and the excesses of the trade union movement as it was styled and characterised. They had good reason for that because they had very powerful unions.

READ MORE ON THE RAIL STRIKES 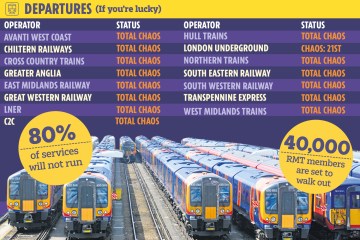 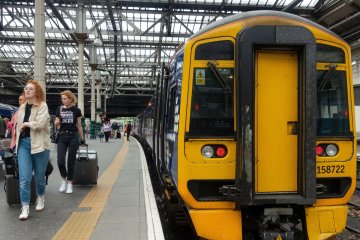 “I’m nostalgic for the balance we were creating. I think society was becoming rebalanced in the 70s.”

Mr Lynch, on a pay and perks package worth £124,000, wants a return to the “values” of figures like Scargill, Jack Jones, Vic Feather and his RMT predecessor Bob Crow.

He told the BBC’s Political Thinking podcast: “I don’t seek it but everybody’s got an ego. If I wasn’t known to anyone, I wouldn’t be doing my job.

“If you are an anonymous trade union leader, I think there’s something wrong with the campaigning that your union is doing.

Most read in Politics

“I know it sounds a bit over-humble but I know I’ve got an ego and I enjoy some of it . . . but ultimately it’s so the union movement gets a profile in society.”

He said: “Many people who do not get paid if they can’t get to work face losing money at a time they simply can’t afford to.

“Children sitting exams will face the extra distraction of changing their travel plans. And vulnerable people trying to attend long-awaited hospital appointments may have no choice but to cancel.

“By carrying out this action, the RMT is punishing millions of innocent people, instead of calmly discussing the sensible and necessary reforms we need to make in order to protect our rail network.”

Mr Shapps wants to slash the spiralling cost of the railways, which have gobbled up £16billion of state subsidies since the start of the pandemic — equivalent to £600 for every household.

Yet rail network bosses admit they have been worn down after weeks of fruitless talks with Mr Lynch’s hardline negotiators.

One declared: “It’s like dealing with people stuck in the 1980s. Strikes are supposed to be a last resort, not the first, which seems to be the view of the RMT.”

More than 40,000 RMT members will join three 24-hour strikes in a dispute over pay and job losses.

Big business fears the stoppages on Tuesday, Thursday and Saturday could cost the economy up to £1billion — and unions refuse to rule out further walkouts.

Non-strike days will be hit too as trains will be out of position.

Network chiefs need to find an extra £500million in savings by 2024 to meet the Government’s demand for £4billion efficiency cuts.

They want to use more technology and voluntary redundancies, saying the moves would make pay rises possible for staff. But the union is demanding an 11.1 per cent rise.

Mr Lynch said yesterday: “As a result of this transport austerity imposed by the Government, the employing companies have taken decisions cutting benefits, making staff work longer. In the face of this massive attack on our people, the RMT cannot be passive.”

Labour leader Sir Keir Starmer accused the Government of deliberately “pouring petrol on the fire” in its handling of the rail dispute.

He told a local government summit in Warwick: “Boris Johnson and Grant Shapps want the strikes to go ahead. They want the country to grind to a halt so they can feed off the division.” But he was accused of hypocrisy after papers signalled he privately supported rail strikers.

Leaked minutes of Labour’s ruling national executive showed him saying “it was wrong for the Government to restrict the right to strike”.

Mr Shapps said: “While his union paymasters are driving members towards a national strike under false pretences, he is saying one thing in public and another in private.”

A YouGov poll yesterday found 52 per cent of voters believe the unions’ pay demands are “unreasonable” with just 26 per cent backing them. 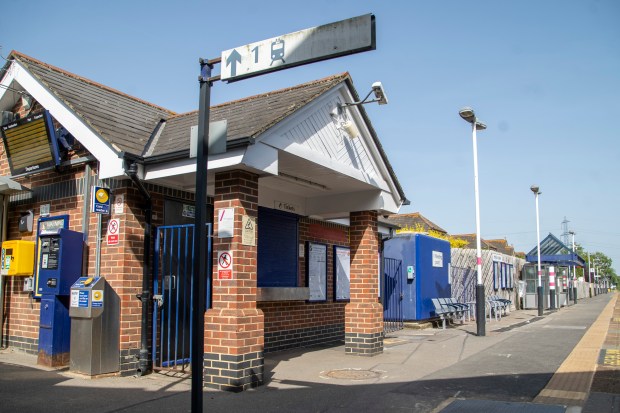 A STATION ticket office unions insist is manned takes £7 a day in fares and sells 12 tickets a week, it’s claimed.

Rail chiefs say passengers buy their tickets at a machine on the platform at Haydons Road station, near Wimbledon, South West London. Staff took £640 in fares in the past three months.

Only 12 per cent of tickets are sold at UK offices but the RMT is resisting closures. An insider called the situation at Haydons Road, left, “ludicrous”.