TODAY’S the day that we get to look behind the scenes at Prince Harry and Meghan’s relationship.

And the Netflix documentary does not disappoint – everyone’s talking about the sweet nickname Harry calls Meghan.

Harry has revealed his secret nickname for wife Meghan Markle[/caption]

In the first episode of the Sussexes’ bombshell show, the pair gush over one another and recall meeting for the very first time.

But their recollections soon take a darker turn, as Harry talks of the ‘pain and suffering’ women go through after marrying into the Royal Family.

“I remember thinking, how can I ever find someone who is willing and capable to be able to withstand all the baggage that comes with being with me,” says Harry.

“After one or two girlfriends, the third or fourth girlfriend is gonna be like ‘hang on a second, I don’t know if I want this’.”

Read more on Harry and Meghan 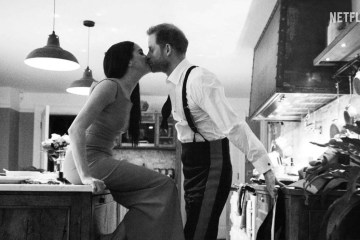 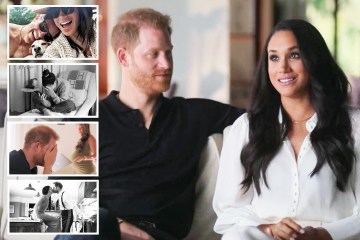 That’s when he introduces his wife, with the cutest nickname.

A sweet selfie of the couple is shown on screen – the pair looking relaxed in regular clothes and smiling at the camera – as Harry recalls.

“When I got to meet M, I was terrified of her being driven away by the media. The same media that have driven so many other women away from me.”

It’s a fitting nickname for the ex-Hollywood actress, who in turn calls her husband ‘H’.

The monikers are a far cry from their royal titles, the Duke and Duchess of Sussex, and show a much lighter side to the pair who have distanced themselves from the monarchy since their marriage in 2018.

The documentary charts Harry and Meghan’s relationship from its early days right through to their harrowing experience with the press and their own family.

Throughout episode one, we’re treated to behind the scenes photographs of the couple, never before seen by the public.

Snaps include a black and white shot from their first date at a London restaurant – a meeting in which Harry was late, Meghan recalls – plus relaxed polaroids of the pair posing in sunglasses and kissing passionately.

In another scene, Meghan talks of the texts and facetimes together in the early stages of their romance.

A picture flashes up of Meghan’s phone, showing the name ‘Haz’ pop up on a video call.

“It was just relaxed and easy, we just got to know each other truly like any other couple,” says Meghan, as more photographs appear on screen.

Harry adds: “I got to know Meghan more and more, I was like ‘I’m really falling in love with this girl.”