REMEMBER when we were told that voting to leave the EU would mean we would “take back control” of our borders?

Most of us guessed that would mean immigration going down.

Who would have thought that the ­Government would take things in the other direction?

New figures out this week show net migration to the UK at an all-time high.

More than half a million people (504,000 to be precise) came in during the year to this June. 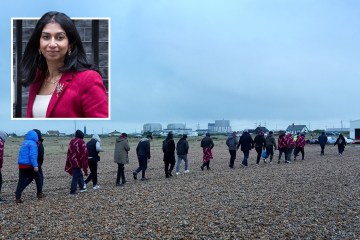 There are so many things about these figures that are staggering.

The first is their historic size. No country can take immigration of such scale and speed without becoming a radically different country.

The second thing is that it shows what a lie we’ve been sold by all parties.

When he wanted our votes, David Cameron promised to bring net migration down from hundreds of thousands a year to tens of thousands.

Hardly radical. That is what immigration was in the 1990s. But he never came close to that goal.

Still, whenever politicians wanted our vote they said the same thing.

Ed Miliband campaigned to be Prime Minister on a promise of bringing net migration down.

As, of course, did Theresa May, Boris Johnson, and every one of the hundreds of other politicians who have wanted our vote in recent years.

So how did they all get it so very wrong?

Already Downing Street is putting its spin on things. They are saying that this has been an unusual year.

They point to a couple of uncommon events. For instance the need to take in Afghans who helped our military and others in Afghanistan.

It is completely right to take these people. But they made up just over 22,000 in the last year’s migration numbers.

Of course there has also been the war in Ukraine where this country has taken in refugees from that conflict.

But it is other factors that explain it.

On top of the 500,000, we have seen a record number of illegal migrants coming into the country this year.

While in 2018 only a couple of hundred people crossed the Channel in boats illegally from France, this year 33,000 came across the Channel in just the first nine months of 2022.

A third of these were from Albania.

Yet even this does not explain these huge figures.

The truth is that they come from the incompetence of a whole system.

Particularly the Home Office, and the unwillingness of our Government to do what is necessary to make our borders secure.

It is not just the fact that the Government has not got a grip on illegal migration.

These figures show that they have not got a grip on legal migration either.

Much of the massive hike in migrants comes from an increase in student visas.

But past experience shows that the Home Office rarely keeps on top of who remains in the UK after they finish their studies.

They go on to say: “There are some unprecedented and unique circumstances that are having a significant impact on these statistics”.

As indeed they are. But the unprecedented is always upon us.

Every year brings some “unprecedented” events. The question is: Why does the Government think that such events must always mean more migration?

For instance, among those who are here genuinely for asylum reasons, how many will return to their countries of origin when or if the situation abroad improves?

Maybe many. Maybe very few. Past evidence suggests the latter.

Still, the Home Office seems to think that Britain has an infinite ability to accommodate people.

Drain on the economy

Don’t forget that on top of the Afghan and Ukrainian asylum systems there has also been the resettlement visas available to residents of Hong Kong.

You might say that this is among the best type of migration — consisting as it does of a large number of people who may be of great economic use to the UK.

But even when migrants are not an actual drain on the economy, they bring challenges with them. For example, everybody has to have somewhere to live.

This Government, like all of its predecessors, is woefully behind on house building.

A fact that causes people to pay sky-high rents and stops young people getting on the property ladder.

Years ago the Conservatives set a target of building 300,000 houses a year.

But at current rates — even if the Government managed to oversee the house-building needed — all of it, and more, would be taken up by that year’s migrants alone.

And that is what the Government fails to understand.