BRITS are anxiously anticipating another lockdown announcement from the PM as the highly infectious Omicron Covid variant rips through the country.


BRITS are anxiously anticipating another lockdown announcement from the PM as the highly infectious Omicron Covid variant rips through the country.

But weddings, funerals and births will avoid any freedom-limiting guidelines set to scupper New Years Eve plans, it is understood.

Weddings, funerals and births will likely avoid any freedom-limiting guidelines[/caption]

In a far cry from the dark days of the first lockdown, groups of any size will be able to gather for the life-changing events if new guidance is announced after Boris Johnson’s crunch talks with his top advisors today.

It comes after a string of hugely positive studies show Omicron IS milder than other strains, with the first official UK report revealing the risk of hospitalisation is 50 to 70 per cent lower than with Delta.

Covid booster jabs protect against Omicron and offer the best chance to get through the pandemic, health officials have repeatedly said.

The Sun’s Jabs Army campaign is helping get the vital extra vaccines in Brits’ arms to ward off the need for any new restrictions.

While a post-meeting announcement is likely, Mr Johnson is unlikely to recall Parliament to rubberstamp legally-binding lockdown restrictions such as the loathed Rule of Six, sources claim.


Christmas dinners ruined by 'rancid' gone off turkeys from supermarkets

This means that the introduction of restrictions that would leave Brits’ much-anticipated New Year’s Eve plans ruined – such as a ban on indoor drinking or the dreaded Rule of Six – will be guidance, and not enforceable by cops.

However, important events – including marriages – will be excluded from any guidelines no matter what, The Times reports.

There will also be no changes to the numbers allowed to attend funerals or births.

In April, the Queen sat alone as she said goodbye to her husband of 73 years, while in 2020, the funeral of 13-year-old Ismail Mohamed Abdulwahab was held without any of his family present.

Weddings and funerals are already continuing unhindered in Wales and Scotland, where tougher rules came into force on Boxing Day.

The PM and his advisers will today examine new numbers on the rates in London — seen as the canary in the coal mine for Covid.

If the figures are positive, Mr Johnson could be persuaded to stick to lighter touch measures introduced under Plan B, potentially with some extra words of guidance.

However, if cases were beginning to put unsustainable pressure on the NHS, the PM may feel the need to intervene with more stringent guidance.

The pair were warned a return to the rule of six, table service only or the closure of indoor hospitality would leave many on the brink of closure.

Christmas takings are already down around 40 per cent on pre-pandemic levels — and a bad New Year’s Eve could push many over the edge, pubs warned.

The letter, organised by the Campaign for Pubs and signed by publicans across the country, said: “We are on the brink — in many cases literally on the verge of being unable to carry on, of walking away and of going under.”

UK Hospitality head Kate Nicholls said: “We urge the PM to stick to current plans. There is still much we don’t know about Omicron but we do know the economic and social hit lockdowns and restrictions have so caution is right.”

Latest London hospital rates showed numbers with Covid rocketed by over 90 per cent in a week — hitting 386 on December 22.

According to reports, if the number hits 400 a day then the country is in big trouble, although health sources say they do not recognise this figure.

And the booster programme has been going well, with vaccination centres jabbing through Christmas. More than 32 million — over 60 per cent of adults in the UK — have had their booster.

Also, encouraging data out last week showed those infected with Omicron were up to 70 per cent less likely to end up in hospital than those with other variants. Downing Street sources said the PM was hoping to stick to his approach of Plan B.

Sir Graham Brady, powerful chairman of the 1922 Committee of Tory backbenchers, warned against new restrictions. Writing in the Mail on Sunday, he said: “It must not happen. Enough is enough.”

There will be no changes to the numbers allowed to attend funerals, it is understood[/caption] 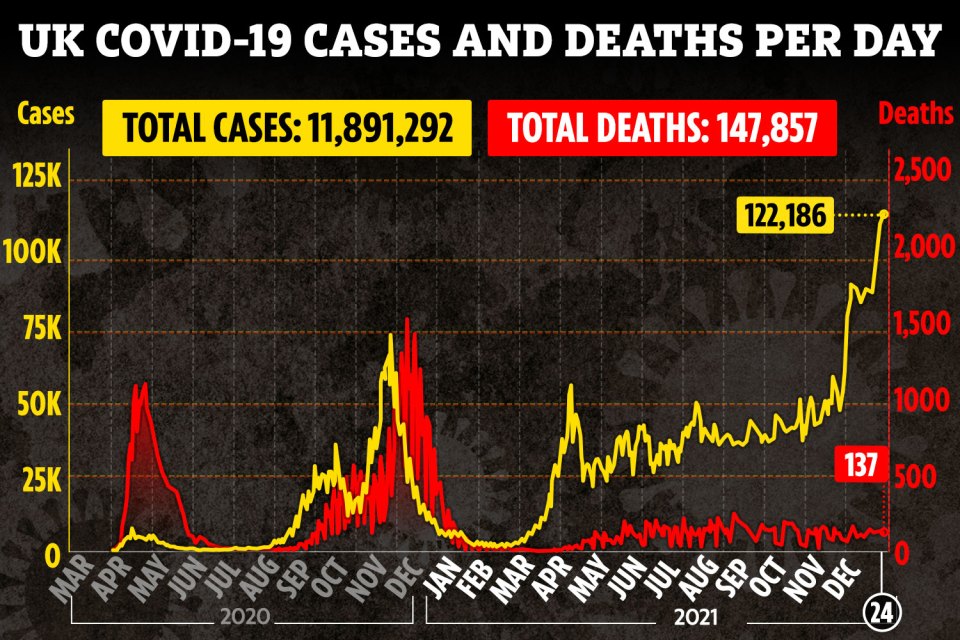 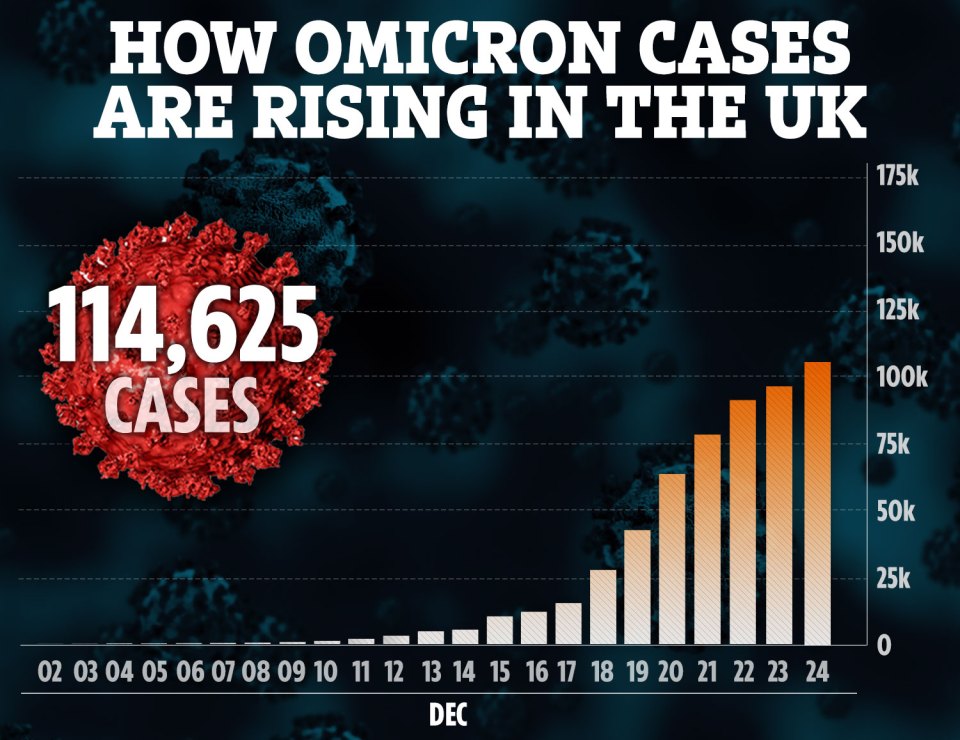