THIS Morning has been cancelled again for the third day in a row and fans are feeling fed up.

Popular daytime TV shows have been shunted to the side to make way for the World Cup fixtures.

Matches are shown daily at 10am, 1pm, 4pm and 7pm, with both ITV and BBC broadcasting the clashes from this year’s controversial host nation, Qatar.

Today, This Morning has been dropped in favour of Switzerland v Cameroon which kicks off at 10am.

Disappointed daytime viewers will at least get their dose of Loose Women at 12.30pm.

But the football again takes over at 3pm with Portugal v Ghana beginning their campaigns at Stadium 974 in Doha, Qatar. 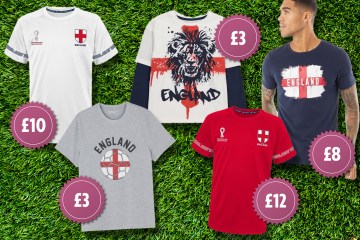 One viewer moaned on Thursday: “I prefer watching this morning than the world cup.”

Another said: “Not everyone likes football”

The Three Lions made a perfect start to the tournament with a 6-2 victory over Iran on Monday.

However, England are being made to sweat on the fitness of captain Harry Kane after he picked up an ankle injury in the win over Iran.

The Tottenham striker, 29, limped out of the Khalifa Stadium with his ankle strapped and is now waiting on the results of a scan.

Meanwhile, glamorous WAGS have landed in Qatar to support their other halves.

But manager Gareth Southgate has said if Covid cases rise the 26-man squad could be prevented from seeing their partners, children and parents.

The Three Lions boss said: “I think towards the end, the women’s team had to batten that down a bit more because they had a few positive cases so we’re going to have to monitor it throughout.

“There’s this balance of the spirit and happiness of the group and the medical line of zero risk, and sometimes if you’re going to take zero risks, it can kill it for everybody, so we’ve got to try and find that balance.

“We’re going to see how the next few days go and we’ve talked about maybe looking at something after the second game but we’ve got to monitor what the rates are out here as much as anything else.”

Southgate’s men will book their place in the last 16 with a win over USA on Friday.

Share
Facebook
Twitter
Pinterest
WhatsApp
Previous article
Police to contact 70,000 Brit victims this week after they make biggest-ever fraud bust
Next article
'More than 90%' of those who report PAD signs have severe amounts of plaque in their veins
RELATED ARTICLES
Tv & Show