HomeTv & ShowWhy England must be brave against USA but there’s one key area...
Tv & Show

THE last time England faced the USA in the World Cup was back in 2010.

The game ended 1-1 between the two sides and both were eventually eliminated in the first knockout round of the competition.

England were the favourites to win the match on paper but created very few chances throughout, leading to widespread criticism of manager Fabio Capello for his rather conservative tactics.

Fast-forward 12 years later, the USA are a different animal, but so are the Three Lions which makes the upcoming fixture an intriguing battle for viewers.

England got off to a flier in the group phase, thrashing Carlos Queiroz’s Iran 6-2 in Doha in what was an impressive performance from Gareth Southgate’s side.

Meanwhile, Gregg Berhalter’s USA will be disappointed with their 1-1 draw against Wales on Monday night.

England know that another victory in Qatar will all but seal their place in the knockouts.

But for the USA , defeat to England could prove to be the final nail in the coffin for their chances to progress to the next round.

Here are three key areas the game may be won and lost.

England were by far the dominant team against Iran on Monday afternoon in Doha at the Khalifa International Stadium.

Southgate switched formation, moving away from his normal, more conservative 3-4-2-1 to a flexible 4-3-3 which allowed players like Mason Mount and Bukayo Saka to position themselves in advanced areas of the pitch, constantly getting into the penalty area which proved to be a superb choice by the manager.

Iran, on the other hand, went with a polar opposite approach.

Queiroz lined his players out in a 5-4-1 formation, instructing his playersto sit deep near their own penalty area and soak up England’s pressure.

For the first 35 minutes of the game, Iran proved difficult to break down for the European side.

England held 83 percent of the ball in the opening half hour and had merely one shot on goal, which was a strike from Saka outside the area which went astray.

Until Jude Bellingham bagged the opener and the goals began raining down for England, Iran’s plan was working.

One component of Iran’s tactics that did work was their high pressing.

Despite dropping into a low block for most of the match, the Middle Easterners did actually press England high up the pitch when the ball was around Jordan Pickford’s box.

In fact, not only did Iran press their opponents, but England also struggled during these moments.

When England had possession of the ball in the middle and final third and were looking to carve Iran’s deeper block open, they looked scintillating at times.

However, in their own third, Southgate’s men fretted on more than one occasion, either giving the ball away cheaply or pumping it long towards Harry Kane.

After the first goal went in, with a few exceptions, Queiroz’s team stopped hunting the ball down closer to England’s goal.

The most obvious reason for this is because of the climate in Qatar.

Intense pressing over the course of 90 minutes plus stoppage time isn’t plausible at this World Cup and teams will be forced to pick and choose their moments to press due to the hot conditions.

Nevertheless, England’s fixture against the USA is at 10pm in Qatar, meaning it will be much cooler for the Americans and because of this, the British side may struggle to cope with USA’s pressing.

On Monday night, Berhalter’s team caused Wales all sorts of problems when pressing the Welsh backline.

The head coach deployed a 4-3-3 on the night and used the front three to match Wales’ three centre-backs man-for-man while the fullbacks marked the Welsh wingbacks.

Due to the pressing system used by the Americans, Wales were unable to progress the ball out of the back to the wingbacks or the midfielders as all of the players were being tightly marked.

Instead, the Dragons would go long towards the forward line, in a similar manner to how England’s defenders and goalkeeper looked for direct passes to Harry Kane when pressed high by Iran.

However, Wales’ frontman on the night was Daniel James who stands at 5ft 7in.

When the 6ft 5in Kieffer Moore came on in the second half, this became less of a problem and the USA’s press was less effective.

This is an area that Berhalter will undoubtedly focus his team talk before the match as the US can cause serious problems for Southgate’s side.

Space on the flanks

England had 78 per cent of the ball against Iran overall, yet three of the six goals scored were from transitional situations where Iran’s defence was caught out of shape.

Regardless, whether England are sitting back for large parts of games against stronger opposition or are boasting the lion’s share of the ball against weaker teams, Southgate has instilled a strong counterattacking core into his players.

This is a rather underrated aspect of the Three Lions’ tactical setup.

The attacking players all combine impeccably when catching their opponents on the counter. 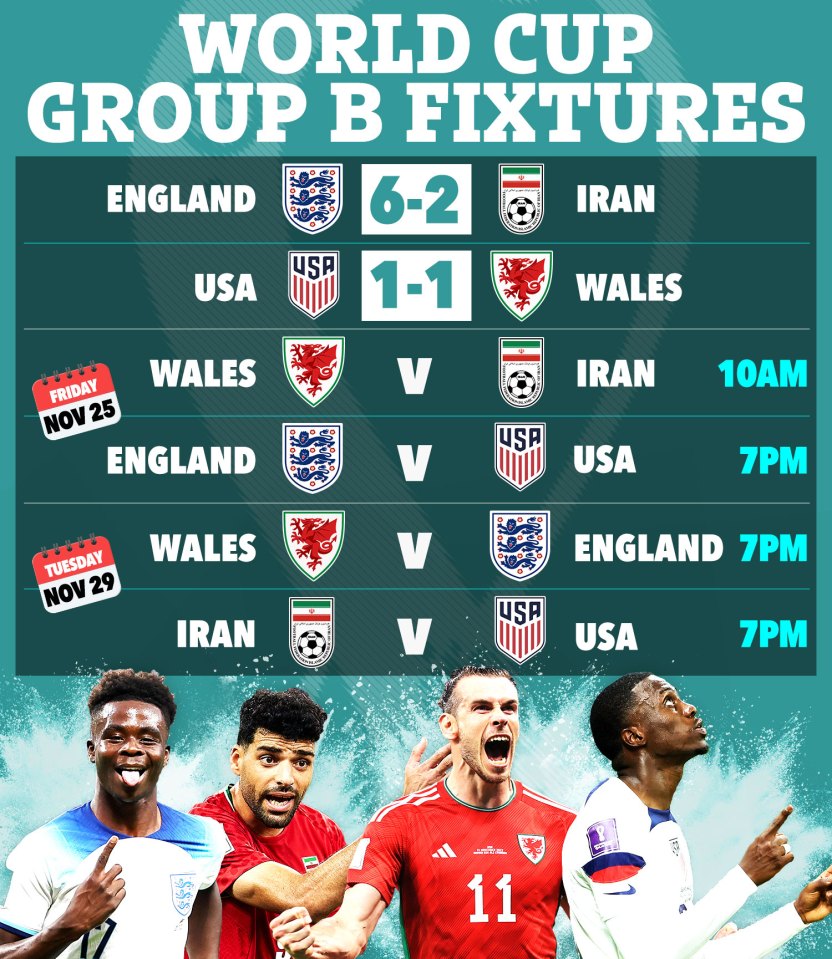 Analysing these three transitional goals against Iran in greater detail, all of them came from exploiting their rivals’ wingbacks pushing high.

As Queiroz used a back five against England, the wingbacks would advance into the final third when Iran were on the attack, but this left space beside the wide centre-backs.

The USA go one step further than this.

Berhalter is likely to set his players up in a 4-3-3 with just two central defenders, instructing his fullbacks to position themselves really high.

As ever, this leaves quite a lot of space on the flanks as there is nobody filling these areas.

Wales didn’t take advantage of the vast amount of space out wide until Kieffer Moore came on who ran the channels really well.

Nonetheless, it is highly probable that Southgate recognises the USA’s frailties in this area and looks to exploit it as much as possible.

With Saka likely to start on Friday evening, the England coach will make sure that his players get the ball to the Arsenal man’s feet as much as possible when hitting the USA on the break.

The left-footed right-winger is deadly when given space on the flanks and is allowed to cut inside.

The attacker’s second goal against Iran came from this exact situation.

Berhalter will need to find a way to combat this.

Perhaps the former Crystal Palace defender will instruct a midfield player to drop into the vacated space, although this may cause an imbalance to the USA in the middle of the park.

The likeliest solution is that the manager either changes the formation, using a back three to go man-for-man against England’s forwards, or else keep one fullback deeper when his team are in attack.

Will Southgate stick or twist?

Against Iran, England supporters rejoiced as Southgate switched from his typical 3-4-2-1 formation to a more conventional 4-3-3, allowing his players to be more expansive in possession.

However, the primary reason for the manager doing so was because of the opposition on the day.

Southgate knew Iran would sit deep and look to defend their own goal for most of the game.

Berhalter has transitioned the American side from a transition-focused, counterattacking team over the years into one capable of dominating games with the ball and building their way through the thirds on the deck.

Friday night’s clash will be an intriguing tussle for the ball, but England certainly will not be able to spend as much time in the USA’s half of the pitch as they did against Iran on Monday.

It is likely that the Three Lions will be forced to sit back in a low block and defend for long spells of the match against USA.

When in the opponent’s half of the pitch, in particular, Berhalter is keen for his team to try and make passes to attacking players who are positioned between the lines.

Having players positioned in the area between the opposition’s backline and midfield is the key to breaking down a low defensive block.

If the attacking players can turn and face goalward, it can cause a lot of issues for the defending side and is the situation that a centre-back wants the least, having to run back to their own goal and tracking runners.

This is something that the USA used to their advantage against Wales in the 1-1 draw, especially in the first half. The Americans even scored from this position.

It will be interesting to see whether Southgate sticks or twists with his newfound 4-3-3 shape.

The formation that England use on Friday will likely be an indicator of how the manager sees the game going.

While it will limit the side’s attacking threat and push Jude Bellingham down into a more defensive role, having an extra defender would allow the centre-backs to be aggressive.

This is because when one central defender steps out, there are still two covering alongside the two wingbacks.

In a back four, if a centre-back steps out, his partner is isolated which can lead to all sorts of issues.

In last summer’s Euros, using aggressive centre-backs to mark opposition attacking players between the lines in a 5-2-3 made England defensively resilient throughout the tournament and which led them to almost bringing home the trophy.

If Southgate switches to a back five against the USA, it means that he expects England’s opponents to have more of the ball and is happy to cede possession to defend for large parts of the game.

On the flip side, remaining with the 4-3-3 would prove that the manager is looking to play in a more expansive manner is ready to go toe-to-toe with the Americans and fight for their share of the ball.

So what does this all mean?

A win practically secures England’s place in the knockout phase with one game to spare.

The Three Lions are the favourites to be victorious in this one, but it will definitely be a much tougher test than Iran gave to the players on Monday in the 6-2 thrashing.

Meanwhile, the USA are in dire need to ensure that they don’t suffer defeat in this game.

Wales are the favourites to win against Iran and a defeat here could leave them in a position where they are relying on England to beat Wales in the final round of the group phase if they are to have a chance of progressing.

Share
Facebook
Twitter
Pinterest
WhatsApp
Previous article
I had tiny boobs – here’s my secret for making yours bigger without going under the knife
Next article
Ethereum Price Prediction as ETH Jumps 10% From Recent Bottom – How High Can ETH Go?
RELATED ARTICLES
Tv & Show